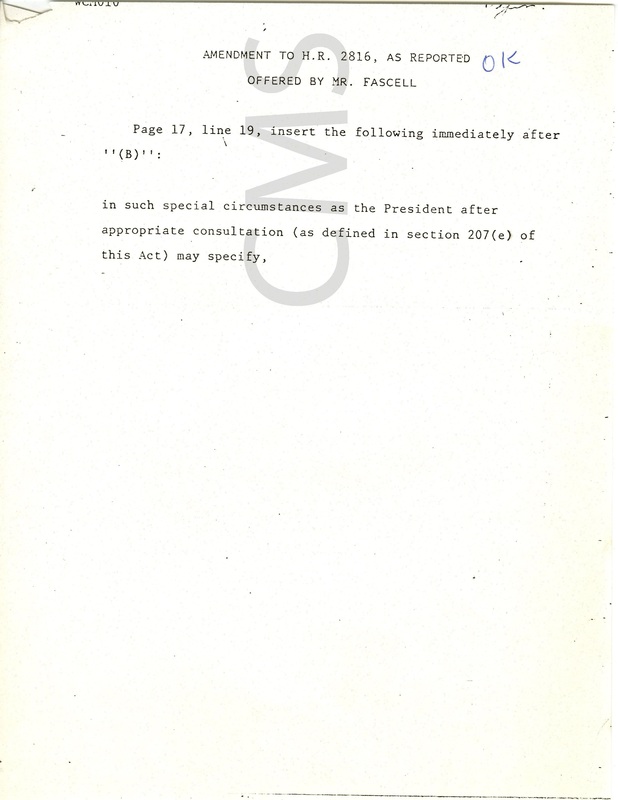 Dante B. Fascell (1917-1998) was a Democratic Representative for the state of Florida (Biographical directory).  He was, “elected as a Democrat to the 84th and to the 18 succeeding Congresses (January 3, 1955-January 3, 1993)” (Biographical directory).  This document in particular is an amendment of sorts to the proposed H.R. 2816 bill.  The quote in the document is out of context because of the fact that it is an amendment:

“in such special circumstances as the President after appropriate consultation (as defined in section 207(e) of this Act) may specify,”

An amendment is, “a proposal to alter the text of a pending bill or other measure by striking out some of it, by inserting new language, or both. Before an amendment becomes part of the measure, the Senate must agree to it” (United states senate).  An amendment does not necessarily have to be as notable as a constitutional amendment.  It can be something as small as part of a sentence in a pending bill, or just the structure of words in the sentence of a pending bill.  Fascell being a member of Congress obviously worked with this bill and was a part it’s process.

Other than the fact that this document is related to the Refugee Act, the process by which one sentence can be changed in an entire bill is rather interesting.  “Life, liberty and the pursuit of happiness” means that each person in our country is important and deserves to be heard.  Even in the hierarchical world of government, one congressman out of many can make his voice be heard by amending just one small part of a bill.
Sources: