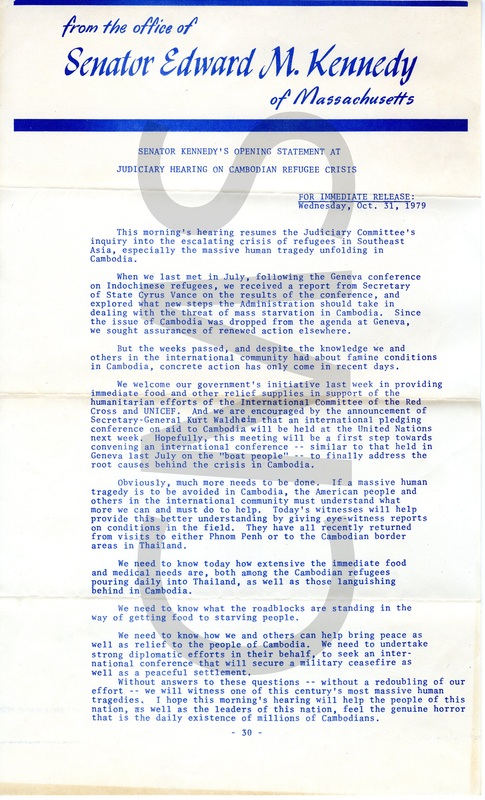 Edward M. Kennedy was the democratic politician elected in 1962 to be the Senator of Massachusetts. As senator, he quickly became very involved in the fight for refugees. He brought his fight to Congress, encouraging them to protect refugees as well as their territories, becoming the founding sponsor to 70 refugee related actions and co-cosponsored 67 bills, acts and amendments for refugees. The Refugee Act of 1980 was both “introduced and championed” by Senator Kennedy, making him one of the most important figures within this Act.

This particular document shows the opening statements given my Senator Kennedy at one of the Judiciary Hearings on the Cambodia Refugee Crisis in October of 1979. Kennedy urges that more needs to be done on behalf of the U.S., Red Cross, and UNICEF. He realizes how important food and medical needs are in Cambodia and he is requesting that help is given immediately. The help given prior has not been enough and Kennedy warns that if more assistance is not given during this crisis in Cambodia, one of “this century’s most massive human tragedies” will be at hand.

This document shows how enthusiastic Senator Kenney is about defending and administering the unalienable rights of life, liberty and the pursuit of happiness. Cambodians should not be denied these rights, particularly life. Kennedy represents how if help is not given, and food and medical attention is not provided Cambodians will not have a chance at liberty nor happiness since they will have very little to sustain life.