Amendment in the Nature of a Substitute 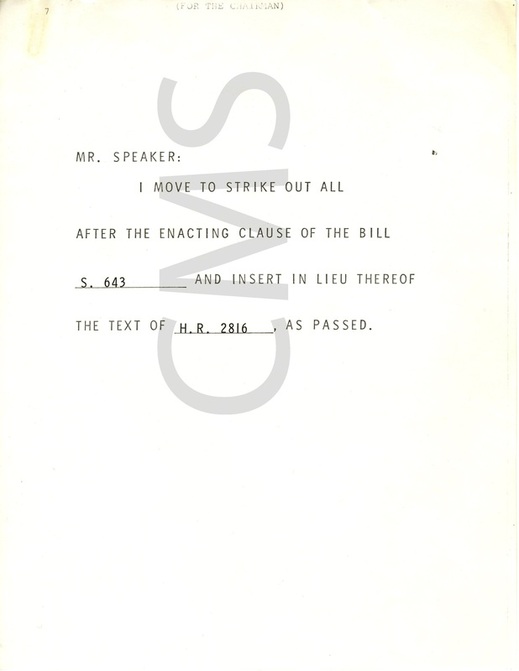 S 643 is a companion bill to the Refugee Act of 1979 (H.R. 2816) (Library of congress).  An amendment in the nature of a substitute is “an amendment that would strike out the entire text of a bill or other measure and insert a different full text” (United states senate).  This is exactly what happened here.  On December 20, 1979 the “measure [was] laid on table in House, [and] S. 643 passed in lieu” (Library of congress).  This means that eventually, H.R. 2816 became S 643.  The Refugee Act of 1979 became known as the Refugee Act of 1980, because that is when the bill became public law (Library of congress).  The House and Senate Judiciaries both worked on this bill.  It started out in the House and eventually went to the Senate.    This document notes the connection between S 643 and H.R. 2816.


Here you can see just how much goes into passing a bill.  The work on the bill started long before it became public law.  Even before 1979, this bill existed in the form of the Immigration and Nationality Act.  The official title of the bill is, “A bill to amend the Immigration and Nationality Act to revise the procedures for the admission of refugees, to amend the Migration and Refugee Assistance Act of 1962 to establish a more uniform basis for the provision of assistance to refugees, and for other purposes” (Library of congress).  Although the ultimate outcome was changed from the original state, it was still a process that you could say technically began 18 years before being fully complete.  There have been no changes to this bill since 1980.  This process is a definite example of our countries belief and support in the idea of life, liberty, and the pursuit of happiness.  Changes were made until the bill was accommodating enough.
Sources: