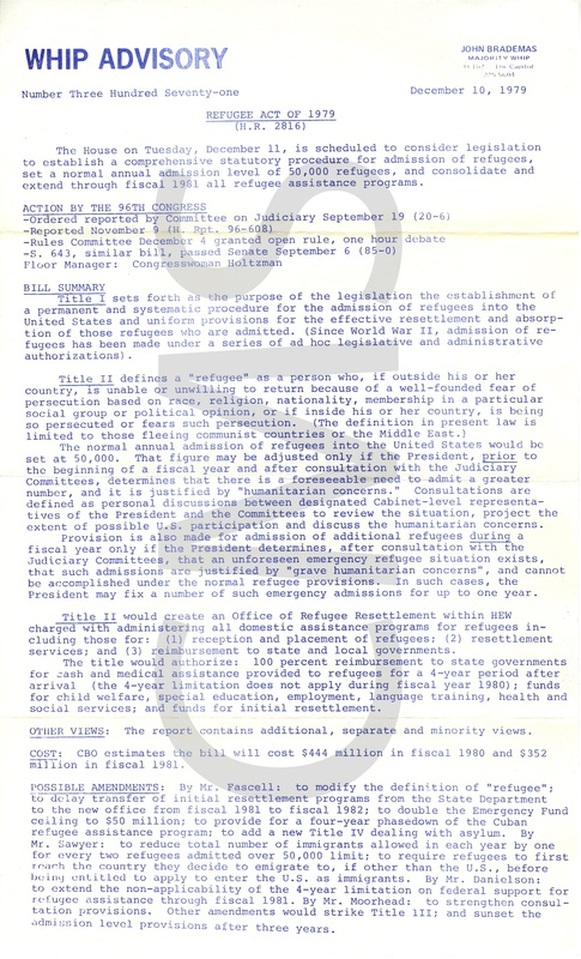 John Brademas was a Democrat elected to the 86th Congress, as well as the following ten Congresses, from 1959 to 1981.  Brademas was also the Majority Whip for the 95th and 96th Congresses (United states house of representatives).  As the Majority Whip, Brademas and his assistants were in charge of summoning votes within his party on major issues (United states senate).  One way to accomplish this is to create Whip Advisories.

This particular Whip Advisory is in relation to the Refugee Act of 1979.  The Whip Advisory “provide[s] lawmakers with the most essential aspects of pending legislation in an efficient manner so that they can stay up to date while also continuing to be productive” (The role of).  This is both helpful and potentially harmful for multiple reasons.  It is helpful because it is used to inform lawmakers with the basics of what a bill entails, but it is also “intentionally selective and biased” in order to highlight inviting aspects of the bill and mull over aspects that lawmakers may disagree with (The role of).  This is harmful because it allows people to “vote on laws about which they’ve only been partially informed” (The role of).

This reflects the idea of life, liberty, and the pursuit of happiness because it shows how our government works to gain interest and potential support for different bills that could help other people.  The document gives a general overview of a bill that is much less tedious to read than the entire bill.  This is useful for the general public who are interested in learning more about the process of how a bill is created.
Sources:

The role of the legislative process in protecting rights to life, liberty and the pursuit of happiness: Selections from the endres collection. (n.d.). Whip advisory. Retrieved on October 27, 2013. http://regis778.wix.com/lawgroup204#!whip-advisory/c1wqc.